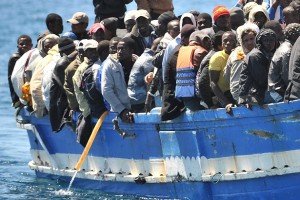 epa02987776 YEARENDER 2011 APRIL
A boat with immigrants on board arrives on the Italian island of Lampedusa, southern Italy, on 09 April 2011. Reports state that Italy and France agreed on 08 April 2011 to carry out joint patrols of the Tunisian coast to block migrants headed for Europe, with the French interior minister saying there was no duty to take in boat people. EPA/ETTORE FERRARI